Culture, philosophies and reforms in public administration for the globalizing world: A reflection on local, regional and international perspectives

The aim of this scholarly collected work is to contribute to the scientific discourse on public administration in a globalised environment. The book reflects on governance challenges in South Africa and in Africa, with its point of departure being the ‘master narratives’ (the so-called grand debates) such as New Public Management and, specifically, the role of technology. It also reflects on the so-called middle range discourses concerning organisational-level issues in government (e.g. leadership and work procedures) and explores new solutions to old governance challenges like corruption and service delivery.

The uniqueness of this collected work lies in its ability to reflect on existing philosophies and practices in an innovative way. Through its multidisciplinary lens, the book opens up a new vision for the future of public administration in the South African context and on the African continent, not neglecting the current local, regional and global environment.

Until recently, globalisation was considered an entrenched world order, but international political events during the course of the past few years have resulted in one of the biggest challenges to its endurance in recent history. This includes developments such as the successful referendum in Britain to exit the European Union, highlighting the growth of a severe nationalist and protectionist agenda that may be a signal of the unravelling of the current globalism world order. These developments inspire deeper interrogation of the challenges to effective public administration globally and the ripple effects in South Africa and Africa as a whole. Pointedly, it is evident that ensuring the voice of citizens in policy decision-making remains a critical governance challenge. On the policy front, there are perennial challenges of land reform, service delivery and poverty, while on the governance front, corruption has metastasised with a growing culture of impunity and lack of accountability in leadership. In the midst of growing corruption, and more than 20 years into democracy, South Africa’s income inequality remains one of the highest in the world. This setting constitutes the context of the research outcome published in this scholarly work. 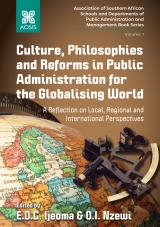