Signposts to Silence provides a theoretical map of what it terms ‘metaphysical mysticism’: the search for the furthest, most inclusive horizon, the domain of silence, which underlies the religious and metaphysical urge of humankind in its finest forms. Tracing the footsteps of pioneers of this exploration, the investigation also documents a number of historical pilgrimages from a variety of cultural and religious backgrounds. Such mountaineers of the spirit, who created paths trodden by groups of followers over centuries and in some cases millennia, include Lao-Tzu and Chuang-Tzu, Siddhattha and Jesus, Sankara and Fa-tsang, Plato and Plotinus, Isaac Luria and Ibn Arabi, Aquinas and Hegel. Such figures, teachings and traditions (including the religions of ‘Judaism’, ‘Christianity’ and ‘Islam’; ‘Hinduism’, ‘Buddhism’ and ‘Taoism’) are understood as, at their most sublime, not final destiny and the end of the road, but signposts to a horizon of ultimate silence. The hermeneutical method employed in tracking such pioneers involves four steps:

Continuing the general direction of thought within what the author endorses to be the best in metaphysical mysticism in its historical manifestations, the book aims to contribute to peace amongst religions in the contemporary global cultural situation. It relativizes all claims to exclusive, absolute truth that might be proclaimed by any religious or metaphysical, mystical position, while providing space for not only tolerating, but also affirming the unique value and dignity of each. This orientation moves beyond the stances of enmity or indifference or syncretism or homogenisation of all, as well as that of mere friendly toleration. It investigates the seemingly daunting and inhospitable yet immensely significant Antarctica of the Spirit, the ‘meta’-space of silence behind the various forms of wordy ‘inter’-relationships. It affirms pars pro toto, totum pro parte, and pars pro parte: that each religious, mystical and metaphysical orientation in its relative singularity represents or contains the whole and derives value from that, and that each represents or contains every other. This homoversal solidarity stimulating individual uniqueness is different from and in fact implies criticism of the process of globalisation. While not taking part in a scientific argument as such, Signposts to Silence aims at promoting an understanding of science and metaphysical mysticism as mutual context for each other, and it listens to a number of voices from the domain of science that understand this. 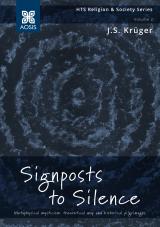