Speaking of Satan in Zambia: Making cultural and personal sense of narratives about Satanism

In this book, it is argued that narratives about Satanism, which have become popular in the Christian context of Zambia from the 1990s onwards, make cultural sense because of their links to traditional African notions as well as contemporary Christian theologies. These narratives also resonate with an unease regarding cultural change, which is connected by Zambians to modernity. Narratives about Satanism further make personal sense to their narrators, the pastors who provide a platform for them, and their audiences. These arguments contribute to the academic study of religion in Africa, in particular of African Christianity and of witchcraft-related phenomena, as well as to the global study of discourses on Satanism and other conspiracy theories. All of these disciplines are related to the topic of Satanism in Zambia, but the phenomenon itself has not been discussed at length, which makes the existing academic literature incomplete and inadequate. The comprehensive focus on the case of narratives about Satanism in Zambia offers new insights and enhances current theoretical reflection.

The research presented in this book is original, carried out during fieldwork spanning from 2012 to 2017 in Zambia and literature study in the years after that. Methodologically, the research is based on participant observation in churches in which testimonies of ex-Satanists were presented, as well as participation in the Fingers of Thomas, a Roman Catholic group which investigates rumors about Satanism. Furthermore, it is based on interviews with pastors and students of theology active in the deliverance ministry, from Pentecostal as well as mainline churches, and also on interviews with people who have had experiences of Satanism. Finally, the research is based on an analysis of collected testimonies of ex-Satanists as they were presented in these interviews, in churches, on radio programmes, in newspapers and other sources. 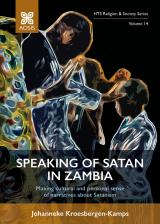